Emeralds were always exciting and loved from antiquity till today. In this article we will try to initiate you into the magical world of emeralds, so next time you are going for emerald shopping you will be a little more informed.

Elements that affect the value of emeralds

The emerald is the most valuable stone in the group beryl.

Beryl has a hardness of 7.5-8 on the Mohs scale (with maximum value 10)which is used to measure the hardness of gemstones.

The color of emerald is a medium to dark green colored by chromium. The more intense the green, the more valuable the gem. The green beryl colored by vanadium is known simply as green beryl.

After  color the value is determined by the clarity which is similar to diamonds, a clear jewel will yield high value, but an emerald without inclusions indicates that the stone has been treated (as annoying cracks on the surface are treated with special oil) or are synthetic.

The clarity of an emerald is determined by the number, size and location of inclusions present in the stone. Perfect clarity will have only fine qualities of emeralds, more often we find translucent emeralds because of inclusions which show us the geological nature of the stones.

The cutting and carat (weight) are also important factors in determining the value.

The most important producing country is Colombia. Their exploitation began by the Incas long before the arrival of the Spaniards. From the mine of Muzo region still are mined exceptional quality emeralds.

In ancient times it was mined from the legendary mines of King Solomon and was the stone that decorated the Holy Grail.

The Incas and Aztecs of South America, where the best emeralds are still found today, regarded the emerald as a holy gemstone. The oldest mines were in Egypt near the Red Sea, and mined for Pharaoh from 3000 BC to 1500 BC. Later the mines were known as "Cleopatra's Mines."

One of the world's largest emeralds is the so-called 'Mogul Emerald'. It dates from 1695, weighs 217.80 carats, and is some 10cm tall. One side of it is inscribed with prayer texts, and there are magnificent floral engravings on the other side. This legendary emerald was auctioned by Christie's of London to an unidentified buyer for 2.2 million dollars on September 28th, 2001. 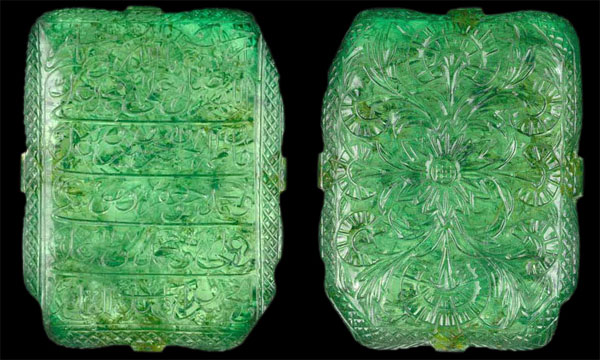