Rose quartz is a type of quartz which exhibits a pale pink to rose red hue. The color is usually considered as due to trace amounts of titanium, iron, or manganese, in the massive material. Some rose quartz contains microscopic rutile needles which produces an asterism in transmitted light. Legend claims Rose Quartz was created when Adonis, lover of the Greek (and Roman) goddess Aphrodite, was attacked by Ares, god of war, in the form of a boar. When Aphrodite rushed to save him she caught herself on a briar bush, and their mingled blood stained the white Quartz pink. 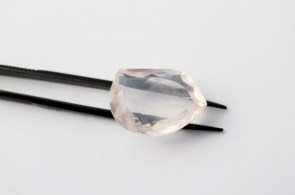